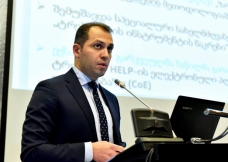 12th Anniversary of the High School of Justice

On 19-20 April an international conference - “Challenges of Modern Judicial Training” was held at the hotel “Radisson Blue Iveria” in order to celibrate the 12th anniversary of the High School of Justice.

The participants of the conference were the representatives of the judicial training institutes of Latvia, France, Croatia and the United Kingdom together with the Secretary General of “European Judicial Training Network (EJTN)” and the director of Belgian Judicial Training Institute.

The welcome remarks of the event were made by:

In course of the event the participants were provided with the information about the development and achievements of the High School of Justice. In addition to some other issues the participants shared their experience in the following fields: recruitment and intake of judicial candidates; the importance of quality initial training; the balance between legal and non-legal training; digital learning component.

The international conference was conducted in the framework of the cooperation between the High School of Justice and the EU supported project - “Strengthening Judicial Training through Twinning”.

Presentations used within the Conference

This program was made possible by the generous support of the American people through the United States Agency for International Development (USAID). The contents are the responsibility of The High School of Justice and do not necessarily reflect the views of USAID, the United States Government, or implementing partner.