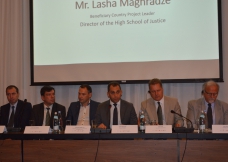 On September 19, 2017 opening event of the project financed by the European Union - Strengthening Judicial Training through Twinning was held.

The leading objective of the project is to support the High School of Justice of Georgia in approximating its institutional set-up and educational programmes to the ones common in the European Union.

Project will substantially contribute to the further progress on judicial and legal reform, in enhancing the quality, independence, transparency and accountability of the judiciary, as well as, in the broader
manner in ensuring stability and effectiveness of democratic
for human rights and fundamental freedoms.

The projects is being implemented in partnership with the consortium consisted of the relevant institutions of Latvia, France and Croatia (Courts Administration of the
Republic of Latvia, Latvian Judicial Training Centre, French National
School for the Judiciary and Croatian Judicial Academy).

Components of the project are the following:

Duration of the project is 18 months and its overall contribution from the European Union is of € 800 000.

This program was made possible by the generous support of the American people through the United States Agency for International Development (USAID). The contents are the responsibility of The High School of Justice and do not necessarily reflect the views of USAID, the United States Government, or implementing partner.